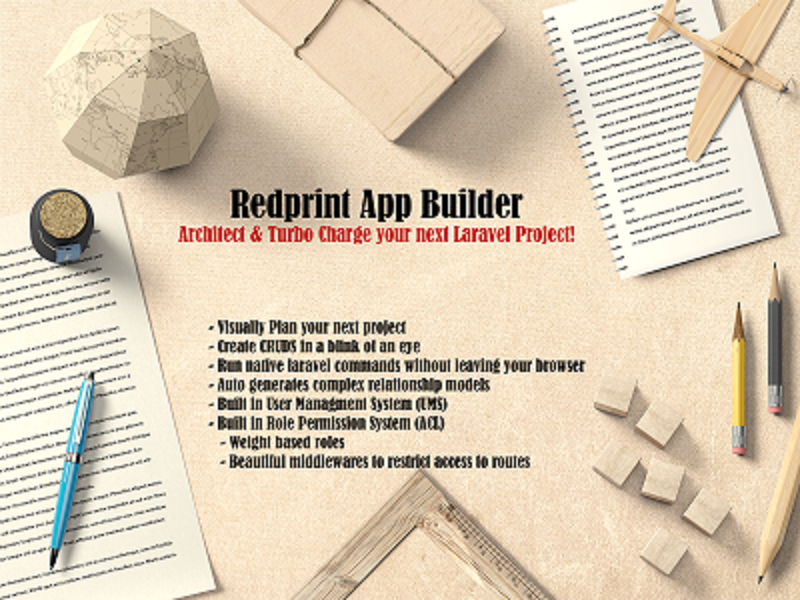 Features at a glance::

For repetative tasks like creating a CRUD, you can totally rely on Redprint App Builder. It generates high quality Code to generate your everyday create, read, update, delete interfaces and backend. Redprint App Builder closely follows Laravel best practices. Which means, no garbage code. You’ll fall in love once you take a look at the code! We promise!

With Redprint App Builder, you can tell the system to automatically generate your search system with the CRUD. Again, the code that gets genrated is of high quality and follows DRY. Have a look at the index method.

With a few clicks, you can generate relations between two models. Not only that, it creates the dropdowns on a previously created CRUD that is related! For example, if you are creating a “Has Many” relationship between “Category” and “Products”, your products CRUD form will now “automagically” have a dropdown to select Categories! How cool is that?

You can now run native Laravel commands from within Redprint! No need to remember all the commands, just go to build-tools, select the command you want to execute, write down the parameter and hit run! Not only that, Redprint already added a command that’s not even in Laravel yet! with `php artisan make:view your_view_name` Redprint will generate a view with basic layout for you!

Redprint AB lets you create a migration using a clean UI. Just focus on what you need and we’ll generate then run the migration for you. If it doesn’t look good, we’ll debug and let you know that too!

Redprint comes packed with its own Role Permission Package called “Permissible”. Permissible allows you to define user roles and permission with a weight based role system!

Redprint has its own user management system that comes with Permissible. You can already create, update, delete users, set their permission/roles etc. Gives you a strong boilerplate to quickly start your next project!

Redprint AB is committed to grow and become more powerful. Make your apps more robust and count on Redprint to help you along the way.

Redprint comes packed with its own Role Permission Package called “Permissible”. Permissible allows you to define user roles and permission with a weight based role system!